......................... Our next meeting will be Tuesday, October 19th, at the Great American Steak Burger at 701 S. Mesa Hills Drive on the westside. The October meeting will include nominations for officer positions. The meeting starts at 7 PM, but come early for some good food and fellowship!.......... Members, join us this Saturday for our Oktoberfest Grub with the Club! See the flyer below and check your email for details!............

The El Paso Corvette Club left Friday morning and took the back roads of New Mexico, and with all the rain we had, the desert was beautiful. We took HWY 9 with stops in Columbus, and Animas, and took HWY 80 into Douglas for lunch. After lunch we stopped in Bisbee at the Lavender Pit for some photo ops. Then it was on to Tombstone where we watered our horses at Big Nose Kate’s Saloon and watched a shootout at the OK Corral. Then it was on to Tucson to our hotel to check in for some evening fun.  We welcomed new members, Dave and Claudia, on their first trip with us, and welcomed Rita back who joined us from San Antonio. It was a great start to the weekend with wonderful friends. More to come!

Saturday morning after breakfast, we headed out to Mission San Xavier del Bac, and is 9 miles south of downtown Tucson just off of Interstate 19. It was quite an adventure trying to find it, but we won’t talk about that here. LOL!
The mission is a National Historic Landmark and  Del Bac is an ancient term meaning “of the place where the river reappears in the sand.” The mission was named for its proximity to the Santa Cruz River where ground water surfaced and gave the desert life. It was founded as a Catholic mission by Father Eusebio Kino in 1692. Construction of the current church began in 1783 and was completed in 1797.  As the oldest intact European structure in Arizona, the 224-year-old church's interior is filled with amazing original statuary and mural paintings. There are many people who say that their prayers for healing have been answered through the intercession of Saint Francis Xavier; so, we prayed and lit a candle for one of our EPCC brothers in the hospital while we were there. Get well, Joey!
Afterward, we headed out to the Pima Air & Space Museum, which is one of the world's largest non-government funded aerospace museums. The museum features a display of nearly 300 aircraft spread out over 80 acres on a campus occupying 127 acres. Just wait till you see these pics of these amazing historical aircraft! We also had lunch there and cooled our jets in their café.
Later we had dinner at the Cattletown Steakhouse & Saloon and had a great time! They have a great waitress named Maria, who added to the fun. We were all very impressed as the owners had set a section of tables aside complete with beers and dinnerware for the 13 Marines who were recently murdered during the evacuation of Afghanistan. America!

Day 3 we added some “honorary” EPCC members.  Turns out that owning a corvette runs in Bill’s and Nancy’s family.  Their son and wife (Evan and Candy), own a beautiful high performance C5 Z06, and their friends, Sandor and Nichole own a beautiful C6 Z06 that sounds amazing.  They joined us for our cruise up Mt. Lemmon.  With a summit elevation of 9,159 feet, it is the highest point in the Santa Catalina Mountains, and a great drive for great cars.  Mount Lemmon was named for botanist Sara Plummer Lemmon, who trekked to the top of the mountain with her husband.

At the foot of the mountain, we all pulled over and went topless to the summit! Great road for a Corvette and beautiful scenery. It was interesting to see the change from cacti to pine trees as we ascended.  Catalina Highway is 27 miles long and takes about 40 minutes to get to the summit and Mount Lemmon Ski Valley. At the top we rode the ski lift for some more incredible views. It is reported that the mountain's northeastern side receives about 200 inches of snow annually. Usually you can walk around when you get to the top, but due to some expected thunderstorms, we were not allowed to spend any time at the top. Afterwards, we enjoyed lunch at the Iron Door Restaurant which is adjacent to the ski lift.

We had planned on taking the scenic route back to the hotel, but a Severe Thunderstorm Warning changed our minds. We saw it brewing over the mountain; so, we drove lickety-split taking the direct route to the hotel as we were being chased there by the weather. It was awesome to see all these Corvettes racing the storm back to the hotel; and guess what? We won! Right after we got to the hotel it hit hard. We enjoyed our last evening partying together in the lobby and celebrating the daily drawing winners who got to take home cash and prizes. Overall, a fantastic weekend getaway: great cars, great adventures, great cruising, and the best part is the fellowship.

The Oktoberfest Event is for Members Only

The Halloween Party is for Members Only.
Check your email for details. 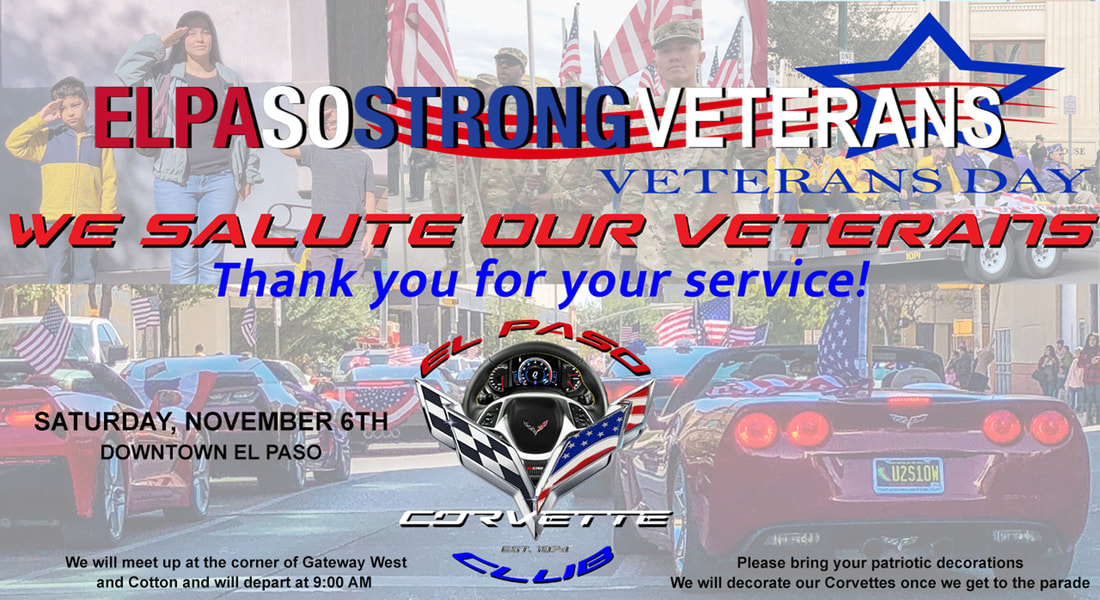 The Veterans Day Parade is a Members Only Event